C140
A young Hermes resting, seated on a rock. He wears winged sandals. 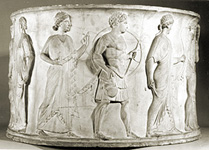 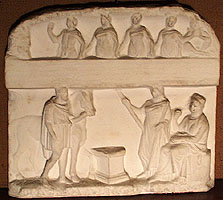 D086
At the top are Acheloos (a river-god), Hermes, three nymphs, and Pan. Below, a hero leading a horse approaches Demeter and Persephone.

C136
Hermes (or an athlete), with right foot resting on a rock so that he can adjust his sandal. He looks up while bending over his raised right knee. His left sandal is on the ground in front of him. 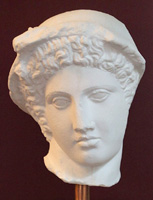 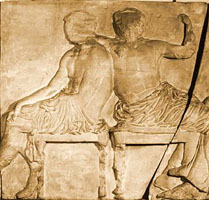 C040
Head of Hermes of Polykleitos.

B158
Portrait of a youth as Hermes.

C113
Hermes holds the infant Dionysos on his left arm. He once held a bunch of grapes in his right hand, for which the baby reached. 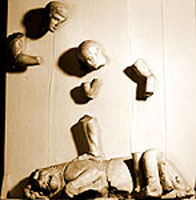 A066
Herakles rests on the dead Nemean Lion, with Athena and Hermes (now missing) looking on. 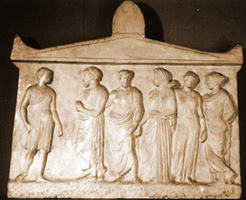 D046a
The hero Echelos carries off the nymph Basile in his chariot. Hermes leads the horses.
See D046b for the reverse.

C053
Herm of Hermes.
The inscription on the base reads:
You will recognise the fine statue by Alkamenes, the Hermes Before-the-Gates. Pergamios gave it.
and Know thyself. 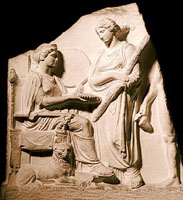 D085
Kybele sits at the left with a lion at her side. She holds a drum and phiale. Persephone, holding a torch, stands in front of her. At the right is a youth (possibly Hermes); most of this figure is now missing. 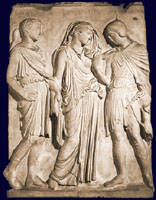 E006
Orpheus, with lyre, and pointed foreign hat to denote his Thracian origins, turns to look at his wife Eurydike. Hermes, in his role as Psychopompos (Guide of Souls) takes Eurydike by the hand to lead her back to the Underworld. The inscription at the top is modern and gives incorrect names to the figures.

C115
Hermes with a cloak slung over his left shoulder. His left hand once held a kerykeion (wand) and his right once rested on his hip. A serpent coils round a tree-trunk at his right. 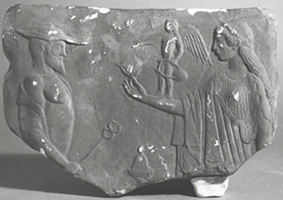