Greek Pottery was made by Greek-speaking people. A significant number lived outside the area recognised today as Greece. There is, for example, a wealth of material from the coastal settlements of modern Turkey, and some of its off shore islands, particularly of the 6th century. Greek-style pottery was also made in the western Mediterranean, for example, in southern Italy and Sicily, from the end of the 5th century. Interaction between Greeks and non-Greeks affected the shapes, techniques, and decoration of Greek Pottery. 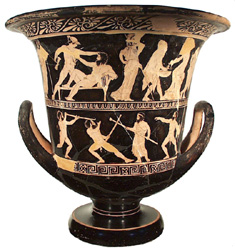