The volute-krater is named after its handles. The François Vase is a famous and early example, but the typical Athenian form occurs only later in the sixth century, with the handles tightly curled so that they look like the volutes on Ionic columns. The shape is also found in metal. Over the course of the fifth and fourth centuries, examples become slimmer, and Apulian volute-kraters from South Italy are particularly elaborate. 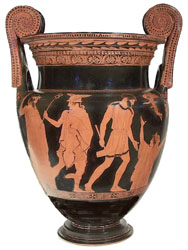