The psykter (compare Greek psuchein - to cool) is a distinctive mushroom-shaped vessel that provided a means of cooling wine. The name seems appropriate, although whether it was applied to this shape in the sixth and fifth century is unknown. It is depicted placed within kraters, and those that are decorated sometimes play on the fact that that they would be seen half-immersed. Whether the krater held the ice or chilled water, and the psykter the wine, or vice-versa, remains uncertain. There had been occasional examples of vessels made with an inner chamber, seemingly for a similar end, but the psykter-shape is developed only in the late sixth century, and production seems to have ceased by the mid-fifth century. 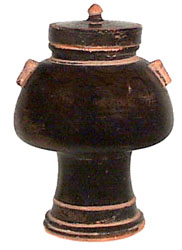