From the time of their rediscovery in the Renaissance, classical antiquities were associated with fine art, whether they were large marble statues, coins or engraved gems, which could also bear signatures. 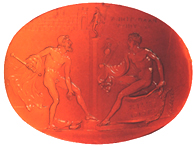 The 'Felix' gem in Oxford belonged to the early 17th century collector Thomas Howard, 2nd Earl of Arundel (1585-1646). He exchanged gems with Peter Paul Rubens who made this portait of the Earl. Artists, painters and sculptors, looked to the antique for inspiration; they routinely drew antique marbles and plaster casts moulded from them. Copies of statues such as Apollo Belvedere or Venus de'Medici adorned academies of art and art schools from the 16th century. Later they became prestigious decorations for the grand houses and gardens of northern European aristocrats.

Engraving of the interior of the Radcliffe Library about 1840

By 1750 casts of Apollo and Venus (Aphrodite) even stood in the University of Oxford's Bodleian Library, presumably brought back by an Oxonian on his Grand Tour. Later, in the early 19th century, a number of casts were displayed in the University's Radcliffe Library as depicted in the above engraving.